A good colleague of mine at The University of Adelaide, Corey Bradshaw, recently posted a blog on what we don’t know about climate change….. and the answer is scary. It is such a poignant article that I thought I would share it again here. 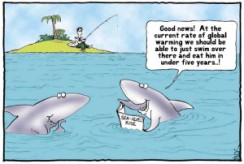 My good friend and tropical conservation rockstar, Bill Laurance, just emailed me and asked if I could repost his recent The Conversationarticle here on ConservationBytes.com.

Several non-scientists have said it really helped them to understand what’s known versus unknown in climate-change research—which was helpful because they feel pummelled by all the research and draconian stuff that gets reported and have problems parsing out what’s likely versus speculative.

With an introduction like that, you’ll just have to read it!

“It’s tough to make predictions, especially about the future”: so goes a Danish proverb attributed variously to baseball coach Yogi Berra and physicist Niels Bohr. Yet some things are so important — such as…

Getting to grips with the brave new world of future climate, energy and technology - notes from an ecomodernist scientist

The truth is out there

Oceans are active, just not always for the right reasons