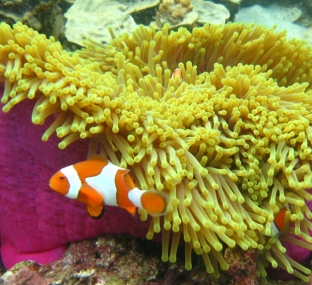 To understand how complex ecosystems function, and how things will change if we push them too hard (and we’re constantly pushing!), we humans need to break them down into simple parts. I’m not going to tell you that we shouldn’t do this, because we need to start somewhere, and I’ve certainly done it myself. Where we go wrong, however, is by not putting the parts back together again to try and understand how the entire system may work, ultimately giving us a very simple view of how the world works. But, every now and then we are reminded in stunning detail how failing to build up again will provide us with the wrong information.

My research group recently had one of these stunning moments when we were visited by Prof. Phil Munday from James Cook University. His research is primarily concerned with how ocean acidification will impact on fish and their various roles in the functioning of ecosystems. Basically, he shattered our thoughts about ocean acidification by teaching us that 1 + 1 does not equal 2!

In an elegant series of experiments, Phil’s research group has shown that if you look at the separate responses of predatory fish and their prey to ocean acidification you may not accurately predict the outcomes. For example, under near-future ocean acidification, clownfish (Amphiprion percula) are unable to recognise the smell of their predators. Even worse, some species of fish became almost suicidal, being attracted to the smell of their predator!

If you were to take this on face value you would think that these results mean that small fish are going to have increased mortality under future ocean conditions. However, Phil has shown that it’s not that straight forward because when predatory fish are also exposed to ocean acidification their prey preference can change; preferred prey under current conditions are the less preferred prey under future conditions.

What does this tell us? Apart from the fact that some fish are going to get lucky, I think the big point here is that we cannot simply add up the results of a number of simple experiments looking at individual system components and identify what will happen to systems overall. Just like unexpected synergies among different stressors, we can’t assume that adding up the components will be enough. It’s time to take a more system-oriented approach where we can!

Notes from an ecomodernist scientist

The truth is out there

Oceans are active, just not always for the right reasons